Though this song (and this video version) is from Lou Reed’s Magic and Loss album, I first heard it in Wim Wenders’ film Until the End of the World. I loved that movie. I was living in DC when it came out and between its initial release and the extended showings at a bunch of second run movie theaters in the city, I probably saw it about five times. It had such a great soundtrack too, which I snapped up as soon as I found it. The version on the soundtrack has an intro that’s missing here but I fired it up in the car this morning as I had a little Lou Reed tribute on my drive to work.

I only saw Lou Reed once, on tour for his New York album. The Feelies opened up the show at the Tower Theatre in Philadelphia. I remember when Lou and his band came out, he said they would be playing the whole album, in order, start to finish, so don’t bother yelling out any song titles. That was kind of unexpected for me but I figured, hey, it’s Lou Reed. He can do whatever the fuck he wants. 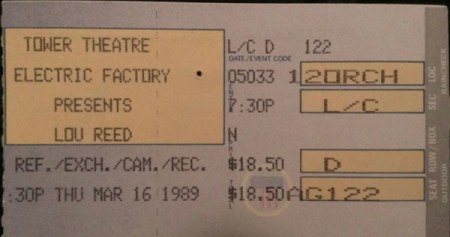 Damn. See you at the next session, Lou.

Instead of boring my friends with my need to catalog my life through music, I'm putting it here.